No One Likes A Boring Neighborhood

As some people know, Laura and I have been staying with my parents in Cedar Hills for the last little bit as we figure out our living situation in response to my job at the Tribune.

Living in Cedar Hills makes a lot of sense for us; Laura can walk to work and because I have to have a car anyway, it makes the most sense for me to drive (as opposed to Laura) to the office.

But here’s the thing, Cedar Hills is so soul-crushingly boring we would never consider living there, no matter how convienient it was. Seriously, not long ago we had a 30 minute discussion about whether we should walk to the Walmart — the only thing within walking distance — and wander around, or if we should just sit around doing nothing. That pretty much sums up our choices. There aren’t even any non-chain restaurants within biking distance.

This is a familiar experience to many people living in single-use, suburban style neighborhoods, but some cities may be underestimating the importance of liveliness as a selling point.

To that end, The Washington Post and Planetizen recently ran a couple of posts on becoming “hip” to attract young professionals:

The panel, whose members are still being recruited, will consider everything from loosened liquor laws and noise ordinances to relaxed regulations covering urban amenities that connect people: food trucks, cafes, outdoor movies. “You have to make the county more appealing,” Leggett said. “You have to make sure that sense of vitality is there.”

This is similar to the theory of change promoted for the past decade by University of Toronto urbanist Richard Florida, who says cities can regenerate economically by attracting a robust “creative class.” That means young professionals in technology fields along with musicians, artists, gay people, writers and creative elites he calls “high bohemians.”

This is standard “creative class” stuff that I’ve covered over and over on this blog, but the point still remains: fostering vitality is as important as anything if you want people to actually live in your city. 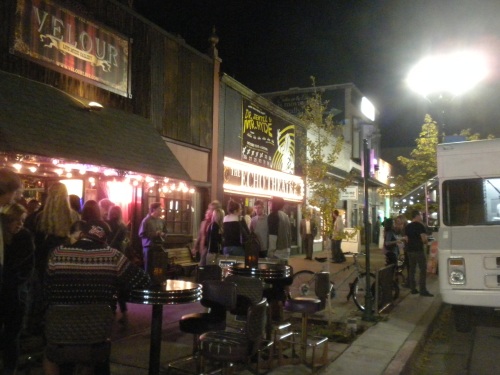 Provo’s 100 Block — or the area around Velour — is often bustling. But a successful city can’t have just one cool spot (that appeals to a small group at that). This type of vitality needs to be studied and encouraged all over.

Provo does a fair job at this, all things considered, but I still know a lot of people who leave Provo or won’t consider it in the first place, because there’s nothing for them to do. The more time I spend in Salt Lake the more of these people I meet, and I’m surprised when I find myself agreeing that there probably isn’t anything for them in Provo. If you don’t want to play in an indie band or see very Mormon jokes, what is there to do really? Relatedly, if you’re older than, say, 26, there’s also not much for you to do.

I once even had a friend who even gave Provo a try, but moved up to Salt Lake less than a year later — despite working in Provo — because there was no social scene.

There are a few lessons. For example, Provo needs a more diverse “hip” atmosphere. A great music scene doesn’t appeal to everyone and can be hard to break into, so there need to be many more options. And it’s not impossible for civic and business leaders to cultivate a more diverse cultural environment.

It’s also worth considering the LDS single adult scenes in south Salt Lake County. They’re legendary and Provo loses people to those areas. For people who are not LDS, there is even less to do in Provo.

8 responses to “No One Likes A Boring Neighborhood”